Wait, it's December already? When did this happen?

Atelier went amazingly well. It was a bit stressful, true, but nothing major went wrong. I was very lucky to have some awesome people to model for me at the last minute. When I do another wearable art show, I'll have to remember to have my models lined up months and months in advance.

Here's a photo one of my classmates took (or found to give to me) of my second piece at Art Central. 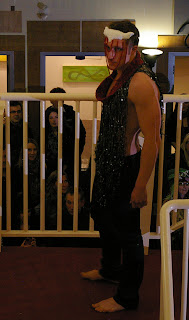 *****
In other news, I haven't shown off my Halloween costumes on here yet. Halloween, of course, is my absolute favourite holiday. This year I decided to be incredibly ambitious and make two costumes: one for a party, and the other for a drag show.

Here's a sketch. I drew it after spending hours drawing fashion figures, which is why the legs are so long and deformed. 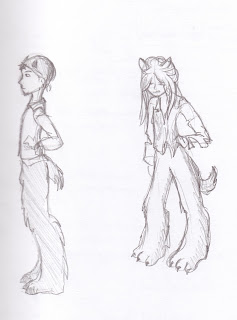 I'd never made digitigrade legs before, with the padding to simulate a leg that bends the opposite way to our own, the way that certain animals' legs do. It was an exciting challenge - exactly how I like my Halloween costumes. *grins* The costumes turned out great. There are a couple things that I need to fix - there's a slight gap between the pant leg and the shoes where the fabric doesn't go down far enough, but for my first attempt at making something like this, I'm pretty darn proud of myself. And I ended up winning a costume contest, too, which was awesome. 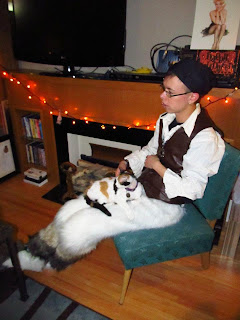 Both the above photos were taken by the lovely Cheri. And here is the werewolf costume in action, because costumes in action are always more exciting.
Posted by Wyrd Wonderland: at 11:27 AM

Wyrd Wonderland:
A fibre and mixed media artist, I am interested in expanding my own boundaries and those of my audience. The world is a wonderful place, and we should not forget that.